If you use USBCrypt to protect just one or two drives, it's easy to keep track of them. However, when the number of the encrypted drives grows, it becomes more difficult to keep them organized. The fact that each physical drive can be represented by two drive letters (one for the host drive and another one for the Virtual Encrypted Disk it contains) does not make it any easier. To help you manage the encrypted drives, USBCrypt offers you the options of assigning names to them. There are several names used by USBCrypt and Windows in different places of their user interfaces. Let us discuss them in detail.

When you encrypt a drive for the first time, USBCrypt asks you to choose two names: the Virtual Encrypted Disk name and the Host Disk name: 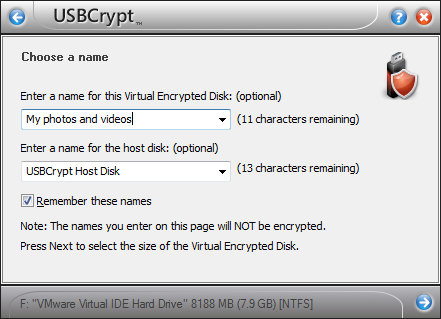 The first name (for the Virtual Encrypted Disk) is used when displaying the windows and menus of USBCrypt. For example, it is shown on the USBCrypt window when starting the encrypted disk: 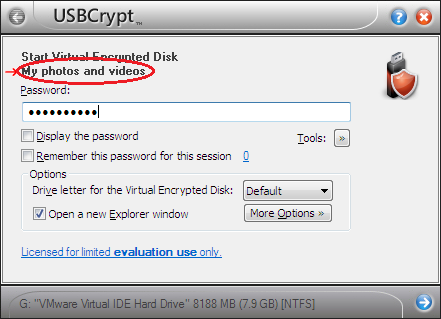 This name is also displayed on the USBCrypt "balloon" notifications:

Or, when you right-click on a USBCrypt taskbar icon, you can see the name of Virtual Encrypted Disk on the menu:

As you can see, by using different names with different Virtual Encrypted Disk, you can make it easier to recognize them in Windows.

What about the second name you are asked to enter when encrypting a drive, the Host Disk name? This name is displayed by Windows as a label next to the host disk: 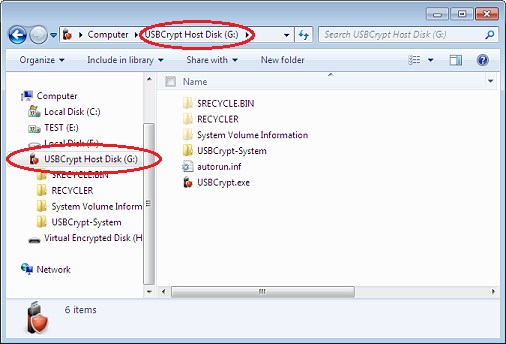 You can change the default name "USBCrypt Host Disk" to something more descriptive. Keep in mind, however, than both the Host Disk and Virtual Encrypted Disk names are NOT encrypted: they can be seen even before you enter the password to start the encrypted drive. 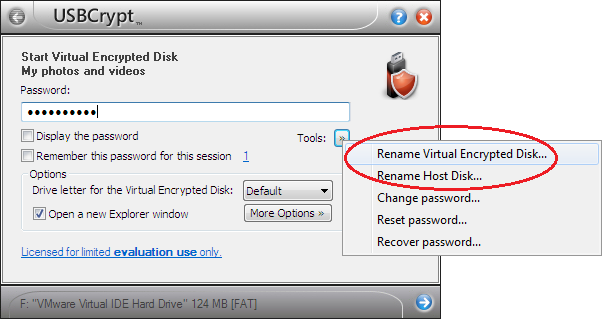 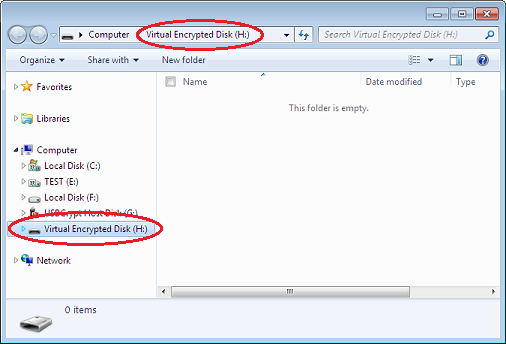 The default text for the label is "Virtual Encrypted Disk" if you have chosen the NTFS file system for it, or just "ENCRYPTED" if you have formatted it with the FAT file system (because FAT limits the number and kind of characters that can be used in a drive label). USBCrypt itself does not provide a command to change such a label, because Windows itself offers it: you can change the label of an encrypted drive in the same way as of any other drive: by right-clicking on the drive and choosing Properties from the menu: 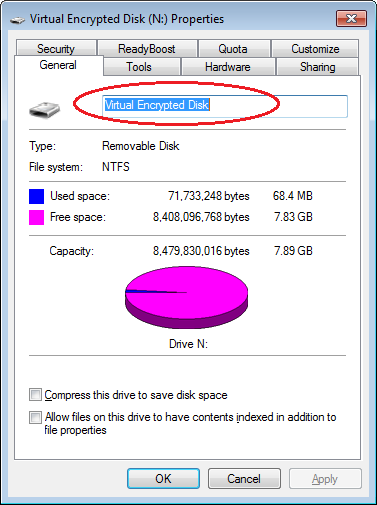