How to encrypt and protect the system C: drive with USBCrypt

If you want to create a Virtual Encrypted Disk on the C: drive, the only thing you need to do when running USBCrypt is enable the "Include the system drive in the list" option: 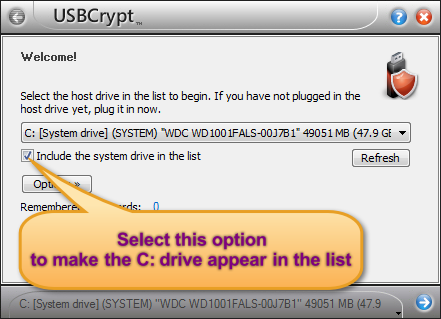 After that, you can proceed as usual: select the desired size for the Virtual Encrypted Disk, the encryption algorithm, the password and so on. Before starting, however, it's a good idea to create a full backup of your system drive, to be able to start over if something goes not as expected.

When deciding on the size of the Virtual Encrypted Disk to create, do not make it take all available free space: leave plenty of room on the host disk for use by Windows.

After the Virtual Encrypted Disk has been created, you can start it as usual (it will have a separate drive letter, other than C:), and move the files and documents you want to be private to the encrypted drive. Be careful NOT TO MOVE the Windows folder and other folders you might see on the C: drive (such as Program Files, ProgramData, Documents and Settings, Users, etc.) These are system folders that must remain where they are, or Windows may start doing weird things. Only move the files and documents that need to be protected, leave everything else where it is.