As you probably know, Windows assigns a drive letter to the each drive that your computer has. If you open the This PC or Computer folder (or, if you use Windows XP or Windows 2000, the My Computer folder), you should see the list of the drives currently attached to your computer. By default, Windows displays the drive letters after the names of the drives. Since AB Commander uses the same internal engine to display the contents of the folders as Windows itself does, the same convention is true for the way AB Commander displays the names of the drives: it shows the label first, followed by the drive letter: 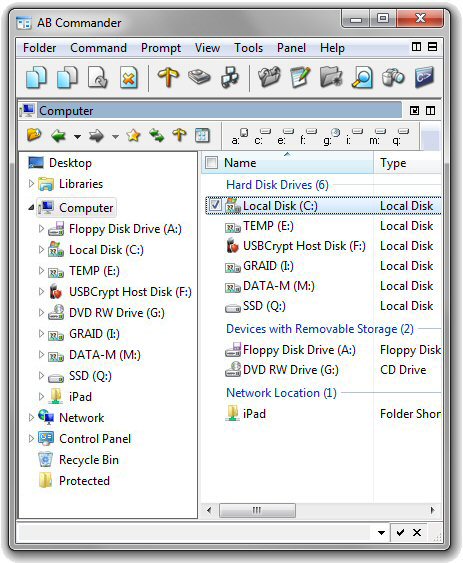 Below are the links to the registry files that make the necessary changes in the Windows Registry. Note that there are two separate sets of files: one for the newer versions of Windows 11, 10, 8, 7, or Vista, and another one for older ones, Windows XP or Windows 2000:

To use a registry file, right-click on its link, and choose Save Target As (or Save Link As, or a similar command) and save the file somewhere on your hard drive. After that, open the link directly from the folder where you have saved it, and confirm to Windows that you do want to import the information from the file into Windows Registry. Finally, to see the change in AB Commander, restart it. For example, if you've imported the DriveLetters-Before.reg file, then the list of the drives should now look like this: 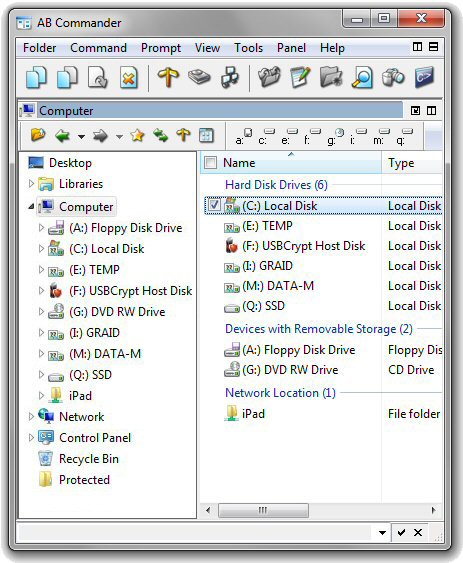 To see the result in Windows Explorer, log off and then log back on to Windows. If you want to return to the default way of displaying the drive letters after the drive names, use the DriveLetters-After.reg file.

If you want to link to this article, you can use this HTML code: <a href="https://www.winability.com/how-to-show-drive-letters-first/">How to show drive letters first in AB Commander and File Explorer</a>